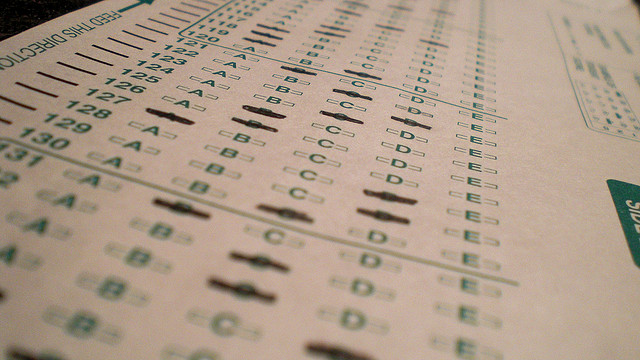 The questions, particularly those in the math sections, could put certain students at a disadvantage.

In his announcement last spring that a new version of the SAT would be launched in 2016, The College Board President David Coleman drew on a favorite buzzword: opportunity.

In his speech, Coleman finally acknowledged the common criticism that the current SAT has little to do with the work students do in high school and will do in college. He promised that the redesigned test would be more in tune with what happens in the classroom. “No longer will the SAT stand apart from the work of teachers in their classrooms,” he said. The preview last week of 94 sample questions—half of which were previously released—from the redesigned test helps reveal whether the new SAT will deliver on its promise. Early indicators are not encouraging.

The new test will correspond with the Common Core Standards—the controversial math and reading benchmarks whose design and implementation Coleman happened to spearhead before taking over the College Board. That means the new SAT could have the opposite of its intended effect, at least in the near term, closing opportunities for students who aren’t yet well-versed in the standards. Kids who lack access to in-person test preparation from tutors like me—who are trained to analyze the new test material and develop strategies for raising scores—could also suffer. The most vulnerable students are those who live in low-income areas or don’t speak English as a first language.

It’s the revision of the math section that could have particularly egregious consequences.

The College Board’s decision to eliminate the vocabulary component from the reading section and redesign the essay portion has garnered lots of attention. But it’s the revision of the math section that could have particularly egregious consequences.

The new SAT will focus on fewer types of math than the current version does, sacrificing breadth for depth and testing students on the material the College Board believes to be most essential to “college and career success.” That might sound like good idea. But with this change in focus comes a change in question style. And that’s problematic.

The SAT has always been what essentially amounts to an IQ exam, testing no math beyond basic high-school geometry. The new version includes fewer questions that deal simply with figures and equations, giving more space to questions like this: This question, ranked by the College Board as “easy,” is very much a product of the Common Core Standards, which ask students to both link abstractions (like the graph of a line) with real-world phenomena (such as the link between a person’s height and the length of his or her metacarpal bone) and express such connections verbally. (The answer, by the way, is A.)

It is fine—good, even—to ask students to carry out these tasks, but in many cases these are skills that students unfortunately haven’t yet mastered. If they aren’t being taught to think about graphs that way, let alone articulate their reasoning in that matter, chances are only the smartest (or well-prepared) teens will be able to arrive at the correct answer under the time and emotional pressure of the test.

Even more concerning, few math teachers are ready and able to teach students these new skills. Mark Driscoll of the nonprofit Education Development Center, which in part develops K-12 math and science programs, was recently quoted inEducation Week lamenting this shift: “Language hasn’t traditionally played much of a role in the training of math teachers,” he said. “In my experience, many teachers lack the guidance and tools to foster communication of mathematical reasoning [with] English-learners.” The Common Core makes noble demands on teachers and students. But, at the end of the day, they are still demands, and it will take students and teachers time and effort to fulfill them.

One problem with tying the SAT to these new standards is that it will force students and schools to play a long game of catch-up. Most states will be gradually implementing the standards over the next few years—assuming it will only take that long and assuming that any student taking the exam attends a school that is successfully using standards. At last check, 42 states are in the process of implementing the Common Core standards—three of the original participants dropped out—but they are doing so at different rates.

The most vulnerable students—namely those who live in low-income areas or don’t speak English as a first language—are likely to suffer the most at the hands of the new SAT.

The other consequence of (theoretically) basing the new SAT on what students are doing in their classrooms is that it threatens to makes success on the exam even more subject to socioeconomic background. Students at struggling schools—where teachers tend to have less experience and and support and where Common Core-related textbooks can be scarce—could be at a disadvantage. After all, they haven’t had exposure to the very materials and instruction integral to performing well on the test. This could all amount to an ironic twist: For all the faults of the SAT, one of its merits, at least in theory, is that it can identify students whose formal education might be lacking but who have the mental firepower to succeed given the opportunity.

There are valid reasons, of course, for questioning the reality of that merit. But the new SAT could provide even more reasons for doubting the exam’s fairness. Students at good schools will have that much more of a leg up on this test because their teachers will be able to get them up to speed on the new SAT content. Because the current version of the test corresponds so poorly with real high school coursework, good teachers presently provide less of an advantage on the SAT than they might on the new version. Exposure to particular components of the Common Core standards will matter on the revised exam, and teachers who know the standards and know how to teach them will provide their students an advantage. Consider another “easy” question from the sample set: Identifying the answer to this question depends on fairly basic knowledge of statistics, which is part of the Common Core standards—but very few students take statistics in high school. Though the number of students taking AP Statistics appears to be on the rise—in 2013 more people took the Advanced Placement course than ever before— the roughly 170,000 participants who took the course that year represented just 1 percent of the total number of students enrolled in high school in the U.S. then. When I asked Doug Pierce, a longtime SAT tutor in New York City who recently got his Ph.D. in political science, about the above statistics test question, he challenged the College Board’s “easy”ranking, dubbing it “intermediate” instead. Pierce, who’s taught statistics classes in college, emphasized that the question assumes the student knows margins of error are based on sample sizes—a rule that isn’t “necessarily intuitive.”

On his blog about test-prep, Akil Bello, another veteran SAT instructor, pointed to a different problem altogether: The new test permits calculators for certain sections that include questions like the statistics one. The question’s appearance in a calculator-approved section, rather than one that prohibits the device, could easily mislead students, particularly ones who haven’t had SAT training, into thinking that the question requires a calculator.

And test-prep fails to address another unintended consequence of the new exam’s emphasis on real-world math: These kinds of questions require more context and thus more text. That could disproportionately hurt students who don’t speak English as a first language, slowing them down or even hampering their comprehension.

Consider the following “real-world” question (that is, if your “real world” involves international travel and regular visits to currency-exchange providers): Coleman and the College Board tout the SAT as a measure of what they define as “college readiness,” but what this peek at some questions suggests is that the revised exam is being used as yet another assessment exam that shapes rather than reflects what kids learn in school. It’s a classic case of the tail wagging the dog.